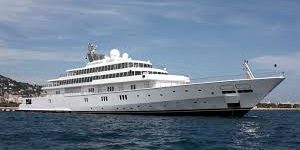 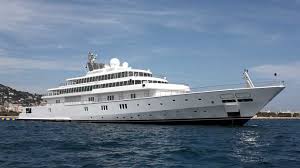 The 138m superyacht Rising Sun, owned by media mogul David Geffen, has sunk. Once one of the 10 largest luxury yachts in the world, the vessel has sunk to 11th place according to a new listing of megayachts published in January 2015. Rising Sun was built in 2004 originally for Oracle cofounder and CEO Larry Ellison by the German shipyard Lürssen with a reported cost in excess of $290 million. Geffen purchased half interest in the megaycht in 2006 and then purchased the remaining half in 2010.

Rising Sun met her downfall late in 2014 with the launching of Finantieri’s Ocean Victory, coming in at 140m, currently the world’s ninth largest megayacht. At the time of her construction, Rising Sun was the fourth largest luxury yacht in the world. Rumor has it that her length was originally extended by approximately 18 meters during construction so that she could be larger than the 126.2m Octopus owned by Microsoft’s Paul Allen.

During the last two years, several new builds have continued to sink Rising Sun in the megayacht standings, most notably, the current record holder, the180m Azzam, built by Lürssen in 2013, the 162.5m Eclipse, constructed by Blohm + Voss in 2010 and the 162m Dubai, built in 2006 as a joint venture between Lürssen and Blohm + Voss.

Much like the race to build the tallest buildings in the world, such as the Shanghai Tower at 632 meters (2073’), or the Burj Khalifa at 828 meters (2717’), super yachts will continue to expand their size depending on who needs to have the biggest and best yacht. How long will Project Triple Deuce hold its position as the world’s largest yacht is anyone’s guess.

“That’s hard to determine, as there is a limit, not in size, but functionality and logistics,” said 4Yacht’s Craig Timm.  “We haven’t gotten there yet, but if the uber wealthy of the world have their way, Project Triple Deuce will be toppled in the future. How soon? That will be anybody’s guess.”

Yet, despite her lowered position in the megayacht world, Rising Sun is no slouch when it comes to luxury. Her five decks have 8,000 square meters of living space in 82 rooms and include a gym/sauna, private cinema with giant plasma screen, an extensive wine cellar, a basketball court and accommodations for 16 guests.

“It takes a person of vision, someone with a dream to own one of the world’s largest yachts and to bring it to reality,” claims Timm. “We work almost exclusively with UHNWI (ultra high net worth individuals) clients and specialize in the megayacht and super yacht market.”

Looking for a Superyacht? 4Yacht is a Professional Yacht Broker Located In Fort Lauderdale Florida and specializes in Yachts, Mega Yachts, And Super Yachts. Visit our website today to discover YOUR next yacht http://www.4yacht.com