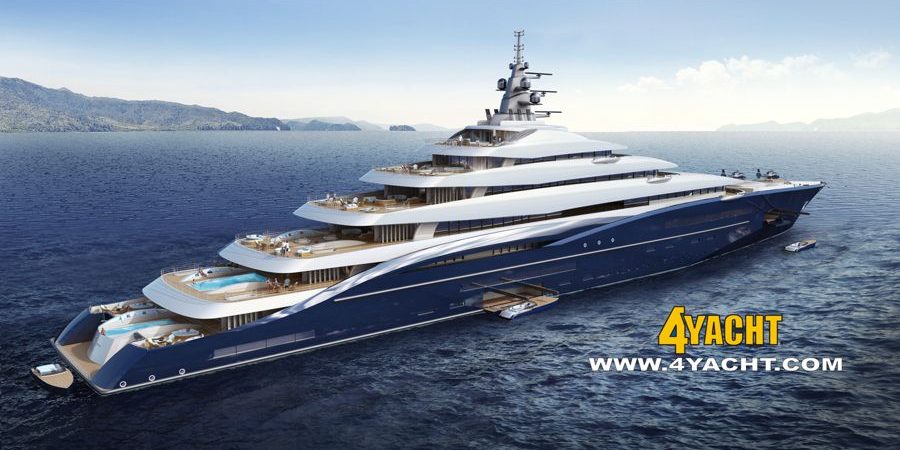 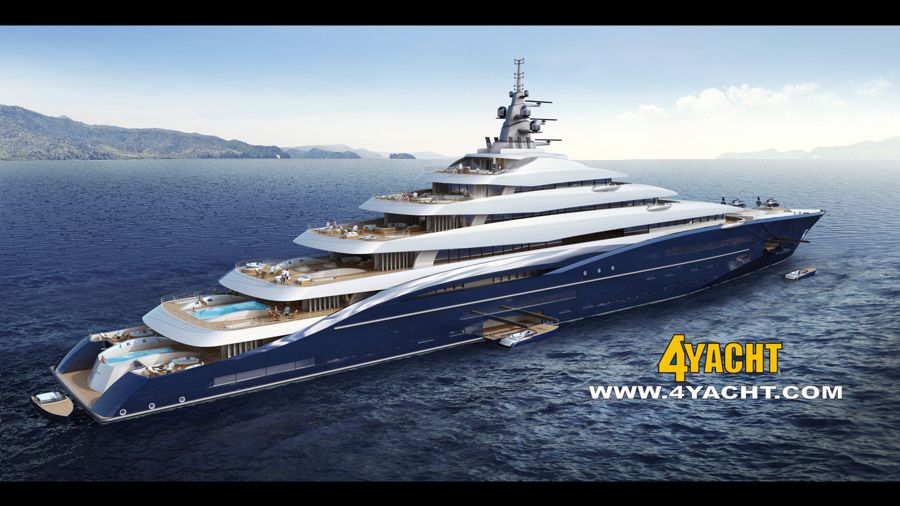 It takes vision to design an outstanding superyacht, but it also takes vision to turn that design into reality. That is why 4Yacht has joined forces with renowned international designer Christopher Seymour to exclusively offer Double Century, a 200m superyacht that could become the largest private yacht built to date.

“4Yacht is honored that Christopher Seymour has chosen us to exclusively market and help bring Double Century to build,” said Craig Timm, of 4Yacht Inc. http://www.4yacht.com based in Fort Lauderdale, FL. “Christopher is known for his innovative designs over many different size categories. Double Century brings his exceptional skills to the superyacht market and is sure to push the envelope into the next tier of sophisticated luxury.”

Seymour is also excited about working with 4Yacht, noting, “Double Century was created to be the next step in the evolution of gigayachts. I want the concept to be something magnificent, respected and admired for what the vessel is, not because of who owns, built or designed her, but for her own merits.” 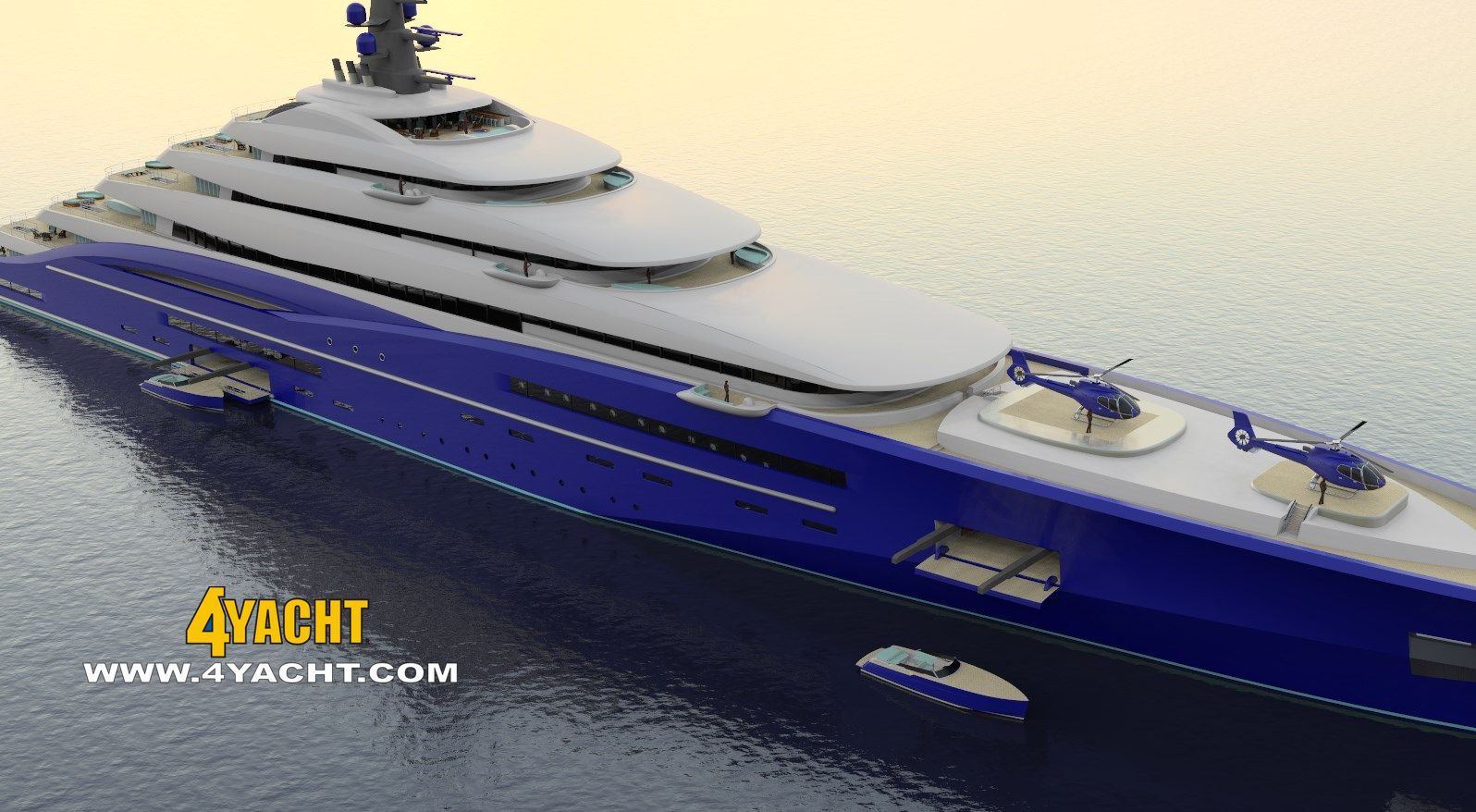 Double Century features sculpted windows with a stunning sheer line and a graceful superstructure that gives her a strong presence. Covering an amazing nine decks and rising 27 meters above the sea, she is twice as long as a typical football field and just as wide. These dimensions would make Double Century 20 meters longer than the current world record holder, the 180m Azzam, built by Lürssen in 2013 and reportedly owned by Sheikh Khalifa bin Zayed al-Nayan, President of the United Arab Emirates and Emir of Abu Dhabi.

“What Double Century needs is someone with vision, someone who wants to give life to an exceptional vessel, make it their own and put a distinctive stamp on the luxury yachting industry,” Craig Timm said.

Per Seymour’s design, Double Century already has an outstanding unique feature, with not one, but two helipads, that will allow owners and guests to access the vessel at the same time no matter where she is. There’s even a boarding lounge where owners or guests can gather while waiting for their flight to depart. Additionally, Double Century has a large hangar bay that provides storage for a whirlybird as large as an EC135.

Access is another prime consideration because of the vessel’s immense size. To that end, Seymour has strategically placed eight elevators throughout Double Century in key locations so that guests can easily travel to all areas. 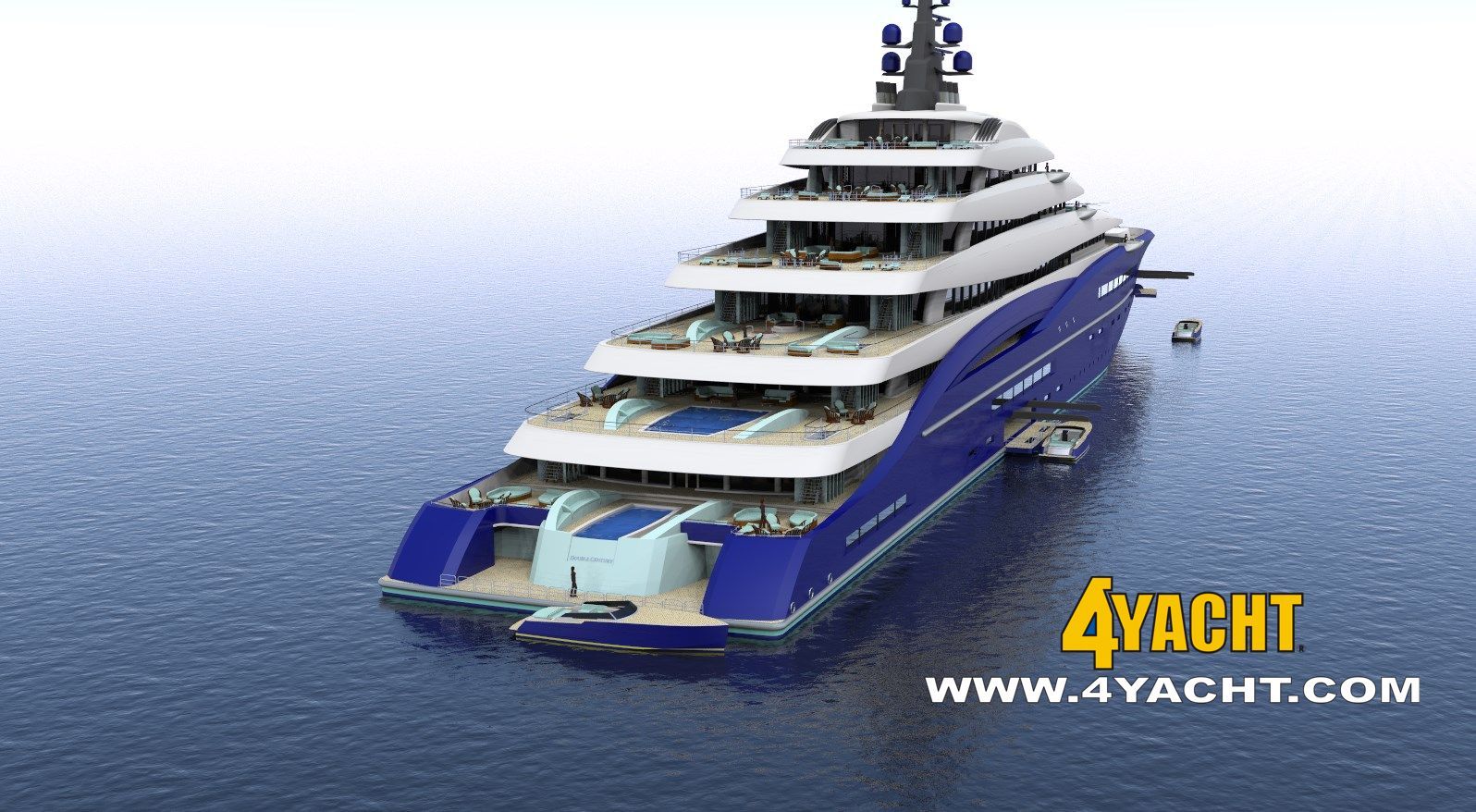 Double Century’s overall look will also set her apart from other superyachts Seymour feels that most superyachts longer than 140 meters begin to resemble cruise ships rather than private bespoke vessels because they start to lose their sheer and take on too many decks.

“I wanted to bring some of these features back into Double Century,” Seymour said. “Thus, she has sheer, stem, chines, larges deck spaces and outstanding interior spaces like a theater/stage and large staircases in addition to the elevators. I would love to see one of he world’s best interior designers create an unforgettable interior that will really make her special.”

Logistically, the vessel’s layout was also challenging, with the forward section carrying a majority of her toys, such as cars and submarines in addition to helicopters, while luxury features such as pools, spas, sun beds, lounges and the like are found aft.

As one might expect of a superyacht of this size, Double Century will have the ability to host over 50 guests in luxurious cabins. The main owner suite and VIP cabins are located forward on Deck 7. All offer opulent living areas, with open room layouts allowing 270 degree views, and his and hers bathrooms and wardrobes. Aft of the owner’s suite are guest cabins for family. A small cinema, study and office are also in this area, along with an open space offering lounge and entertainment areas complete with open bars, dining and a piano. On deck are a gorgeous outdoor lounge, small bar and sunbeds. 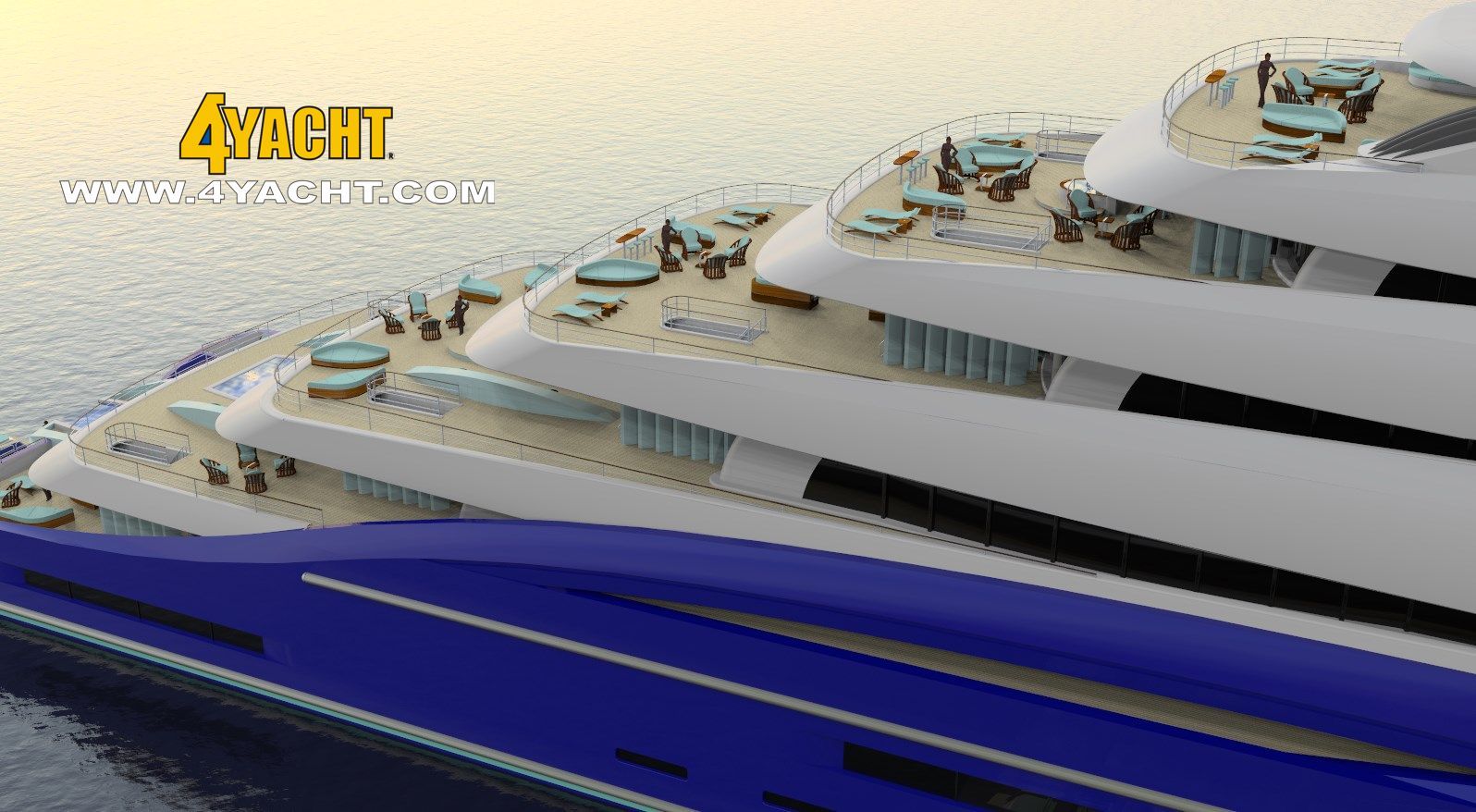 Additional guest accommodations are on Deck 6, including a second owner or VIP suite at the front of the superstructure that will allow multiple owners to utilize the vessel simultaneously.  Other large and small VIP cabins are also located on this deck, along with the main owner dining area with large dining table and bar on either side, large lounge with piano, three open bars and an entertainment area. Outside on the large foredeck is access to the primary and secondary helipads, while aft are located several lounges, sunbeds, al fresco dining, two large Jacuzzis and an open bar. The vessel can accommodate approximately 100 crew members over multiple cabins.

Double Century’s trump card is her theater/stage on Deck 4 that can seat up to 126 guests to allow for stylish entertainment even when anchored in remote areas. Nearby bar areas provide entertainment for guests before and after the show. The ship also has a disco on the deck below, and includes a large dance floor, bar and turntable area.

Other notable features are multiple large swimming pools with quarter moon lounges, several beauty and massage areas, open gym with saunas, a library with a garden, New York-style and Monte Carlo-style cafes, a cinema, a huge beach club and a complete set of water toys, including tenders, jet skis and diving gear. Due to Double Century’s size, she will have her own GPS phone app so all guests and crew will know their deck location when they log on.

As the vessel is still under development, options remain open for power plants. Current plans call for Double Century to be powered by a single gas turbine generator producing 19,000kW coupled with twin diesel 16V32/40 generators producing 7,500 kW per side. These will be coupled with two pod units, making the vessel very efficient. Such a power plant set-up means fewer restrictions with layout and better placement of engineering for increased sea keeping. The vessel will have a maximum speed of 20-plus knots and a cruise speed of 15 knots with a huge 9,000nm range. A large tank system that pumps water around Double Century along with six Quantum Maglift ML600 stabilizers will ensure that the yacht will be comfortable in all conditions.

Even though Double Century comes in at 200m, she can be scaled down to 185m without losing decks or scaled up to a colossal 225m. Craig noted that the negotiating point for the groundbreaking superyacht starts at €699 million. Potential owners can expect her to be in build for about four years.

Are you the individual who has the vision and potential to make Double Century a reality? Give us a call today at 954-767-0220.