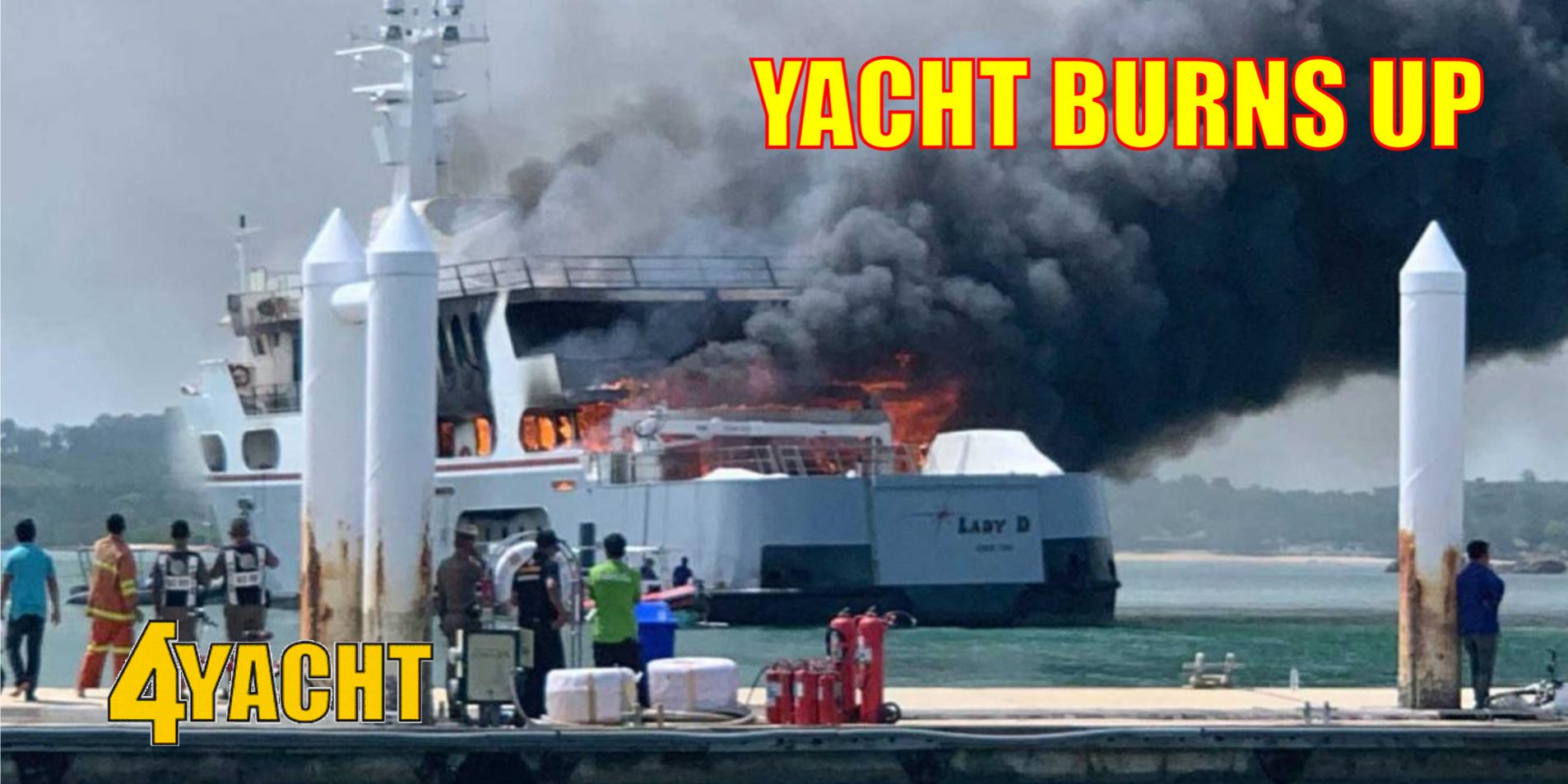 56M Superyacht Lady D Gutted By Fire: A devastating fire that engulfed 56-meter Lady D, moored at the Ao Po Grand Marina in Phuket, Thailand, has finally been put out. The blaze, which started at about 8 a.m. on August 7, quickly raged out of control despite efforts by marina crew to put out it out with fire extinguishers.

Hampering firefighting efforts was the fact that the yacht was moored at the far end of the marina dock, which prevented fire trucks from reaching her on land. Fire officials ordered the crew to untie the yacht so that fire would not run up the ropes and spread to nearby vessels. No one was onboard when the fire broke out and no one was injured in the blaze.

Lady D was initially moved about 500 meters from the marina for safety reasons as she was carrying approximately 3,000 liters of fuel. Once the fire was under control, she was towed further from the marine to Koh Thanan, about three kilometers north-northeast. It took about 24 hours for firefighters to fully extinguish the blaze.

The cause is still unknown, although investigators from the forensic science division of the local Thalang Police Department have boarded Lady D to begin an investigation. According to newspaper reports, the fire began in the yacht’s aft and quickly moved upward. Authorities must also determine how to handle the fuel that remains on board Lady D. Damage has reportedly been estimated at $7.8 million.

Lady D’s captain and crew are all overseas with only one person left to take care of the boat. She had recently returned from a voyage to Langkawi. Police have contacted the boat’s captain, Ted Blenkers, who is a Canadian national. The yacht is registered in Great Britain.

Originally constructed in 1976 by Quality Shipbuilders in Mississippi for the United States Coastguard, the boat was christened Salem and began life as an ABS classified and load lined offshore oilfield supply vessel. She was purchased by a private owner and converted to a leisure vessel in 1989 and sailed under the name Quest. Lady D underwent an extensive refit in 2010 and had previously received upgrades to her mechanical systems and hull in 2005. She can accommodate up to 24 guests and a crew of 16.

Lady D was listed for sale in April 2019 with an asking price of €5 million, but she is currently listed as unavailable.

The fire onboard Lady D is the latest in a string of mishaps that have plagued the superyacht industry over the last several years. In June, former heavyweight boxing champion Wladimir Klitschko and his family had to be rescued off the coast of Mallorca, Spain, after the superyacht they we onboard had caught fire. According to the German magazine Der Spiegel, the damaged vessel was mostly likely a 28-meter Sunseeker UM7.