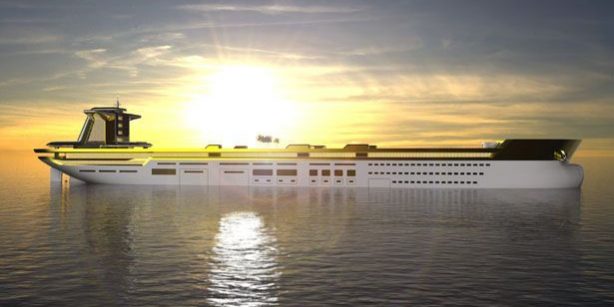 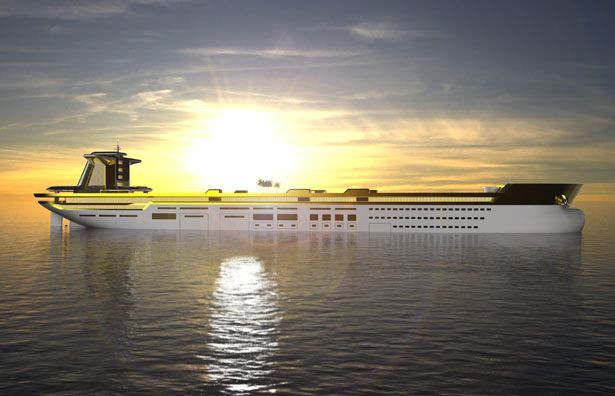 The proposed design is so big that it is staggering, as it will completely dwarf anything currently on the seas. Projected at an unheard of 280 meters or 918 feet in length, the concept design for the yacht Imāra is inspired by the SuezMax oil tankers, but would transform the working vessel into a massive playground the likes of which have never been previously seen.

Imāra is the brainchild of the Austrian design firm MOTION CODE: BLUE, co-owned by Christopher Gloning and Christian Gumpold. With a name that means “emirate” in Arabic, Imāra is targeted toward Middle Eastern billionaires who want to take living to the next level by finding ultra luxury on the seas on a vessel that looks like one of the oil tankers that transports the source of their wealth.

The terms superyacht and gigayacht don’t suffice for this project, so the design team has invented a new yacht category, calling it YachtMax, based on tanker categories beyond 200 meters.  Imāra has the potential to set a new standard in private yachting with a total of 11 decks and a beam of 57 meters. 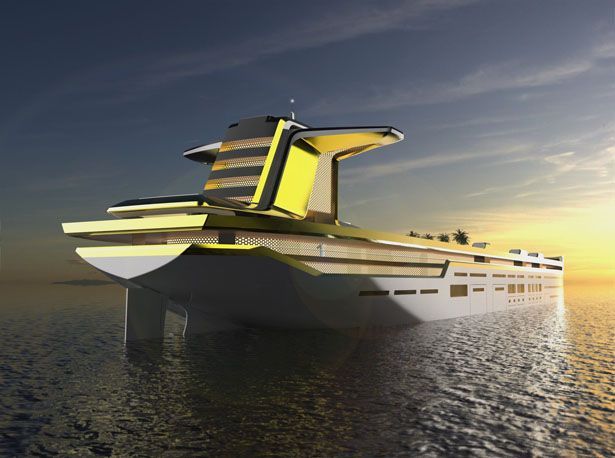 “Even if this project never sees the light of day, the mere fact that the yachting industry is thinking of such a project indicates that superyachts will continue to get bigger and bigger,” said 4Yacht’s Craig Timm. “It’s something we have said for a long time now. If Imāra isn’t built, someone else will come along with an ultra large design that will dwarf what is currently in the water.”

Since its founding in 2009, MOTION CODE: BLUE has considered itself a trendsetter for its innovative designs that push the limits of the yachting world. The firm has designed 65.3m MY H2 that will reportedly become the world’s first energy autonomous superyacht, currently undergoing construction preparation. MOTION CODE: BLUE is also developing a line of submarine-superyacht hybrids under the company name Migaloo.

Turning what essentially would be an oil tanker into a luxury toy could be quite an undertaking. The overall exterior design concept calls for a highly precious aesthetic that combines common tanker superstructures with modern, custom design elements and state-of-the-art superyacht features. The bright white hull features golden accents. The raise foredeck hosts three large helipads that can accommodate a total of five choppers to allow guests to access the ship no matter where it sails.  Power and energy systems have been left open to client preferences and may be fitted as an environmentally friendly vessel. 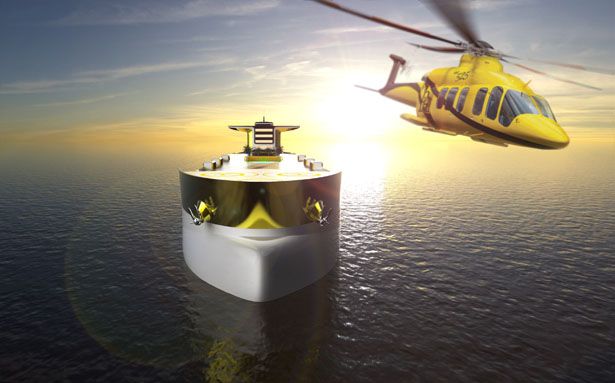 A large four-deck atrium is located amidships and provides imposing views to the wet garages below. That can house tenders up to 90 feet in length. Lounges, restaurants, bars and shops surround the atrium. A large pool with bar, palm trees and a four-deck high waterfall are also near the atrium. The impressive tower features a large bow-oriented guest terrace with bars, dining area and lounges, while the wide stern terrace is a dedicated private area for the owner with a pool, Jacuzzis and sun lounges. All deck areas are accessible via custom pained BMW i3 electric cars.

The enormous interior design of Imāra simply defies imagination as evidenced by the four-story ski slope and accompanying Austrian-themed lodge. All interior corridors are wide enough to allow passage of the ship’s electric cars. The tower’s upper decks have several private apartments with balconies to host VIPs or owner’s relatives and include two elevators and wide staircases. The top two decks are dedicated to crew and officer quarters along with a spacious bridge.

Eight, two-storey VIP suites are located in the hull, each with private terrace, floor-to-ceiling windows, private saloon, beach club and garage for an electric car.  Ceilings are three meters high throughout the interior. Owner quarters, access via private elevators and stairs, are directly over the wet garages, stretch over three hull decks and include private saloons, spa areas with indoor pools, a gym, office areas, study rooms, a library and art galleries.

“Building this behemoth could take approximately three years,” Timm said. “It’s difficult, however, to speculate on the cost because of the vessel’s entire fit and finish.”

Who knows if Imāra will actually be built? It sure gives food for thought, however, on the possibilities that lie ahead for the superyacht industry.