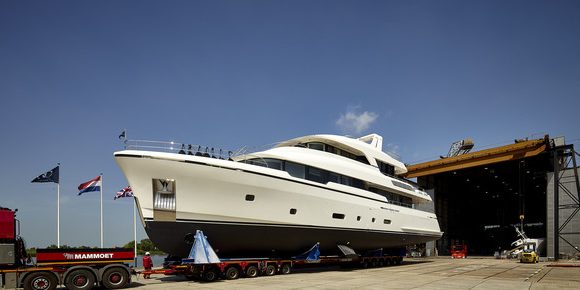 Dutch Superyacht Manufacturer Moonen Declares Bankruptcy: A court in the Netherlands has declared the Dutch superyacht manufacturer Moonen bankrupt, just weeks after the shipyard announced that it had secured the backing of a new investor. According to IBI reports, talks between Moonen and the investor remain serious despite the bankruptcy ruling. The chairman of Moonen’s parent company was reportedly arrested in Spain in May.

Over the last few years, a series of financial difficulties has hampered Moonen resulting from the global financial crisis and the plummeting price of Mexican steel in 2015. The manufacturer also underwent a series of management changes, including the installation of Johan Dubbelman as CEO in 2017.

Spanish police arrested Alonso Ancira, chairman of Altos Hornos de Mexico (Ahmsa), Moonen’s parent company, on charges of corruption. Since then, the Mexican government has frozen all of his and Ahmsa’s bank accounts, including Moonen’s. Some accounts were unfrozen, however, to enable Moonen to pay wages and subcontractors. However, Ahmsa has not provided financial support since the arrest. The lack of financial support and required payments on the construction of Project YN199 on speculation has led Moon to declare bankruptcy.

In early July, Moonen announced that it was in the advanced stages of negotiating a strong partnership with an investor familiar with the industry who brings a global business background. The goal of the new investor, according to Moonen executives, would be to strengthen the company’s position in the market and increase the number of superyachts produced annually.

Dubbelman has indicated that he sees cooperation with the proposed new investor as a positive development as well as a perfect opportunity to expand. By teaming with a reputable investor, Moonen will be able to secure future growth in terms of numbers for the 30- to 50-meter superyacht segment.

Moonen official have noted that Ahmasa has not been a reliable owner in the past so seeking a new investor has been crucial to the shipyard’s survival. The unidentified investor is reportedly eager to enter the superyacht construction market and fits well with Moonen’s ethos. The bankruptcy filing could end up being a positive step for Moonen as the new investor may be able to step into the ownership of the shipyard with no links to Ahmsa, as the potential investor has indicated that he wants no association with that company.

Over the past five years, Moonen has only delivered three superyacht projects, one each in 2015, 2016 and 2018. The lst launching was the 36.3-meter Brigadoon. The yard currently has one speculation build in progress, the 36.6-meter Martinique 2.