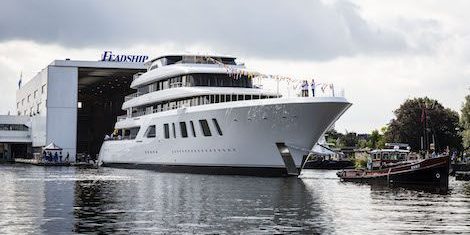 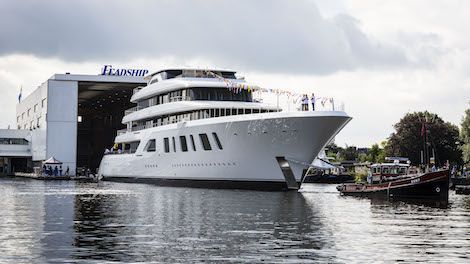 Feadship Launches Much-Anticipated Megayacht Aquarius: Following a private ceremony at its Aalsmeer facility in the Netherlands, Feadship has launched the highly anticipated 92m megayacht Aquarius. The fully custom superyacht, reportedly owned by an American who has previously owned 50m and 60m yachts, will now embark on extensive seat trials and final outfitting before being delivered in 2017.

Aquarius has an array of typical Feadship signatures that include the manufacturer’s conventional bow and raked superstructure. Sinot Exclusive yacht Design provided her exterior styling in collaboration with de Voogt Naval Architects. The design team was in continual contact with the owner’s team to ensure the highest possible outcome.

Feadship CEO Hank de Bries indicated that because the owner was highly experienced in owning yachts and had been in contact with the shipyard for several years, he realized that the only way to obtain the experience he wanted ws to move up to a bespoke Feadship.

As a well-known player in the American hospitality industry who is highly ambitious, the owner also noted that his own team dedicated two years of intense work on Aquarius that has resulted in a completed project that is a perfect marriage of interior and exterior while also seamlessly integrating with the sea.

Aquarius was formerly known as Project Touchdown  (Hull 695) and reportedly had a sale price of $215 million USD. She accommodates 14 guests in seven statements with an estimated crew of 30. The steel vessel, built with an aluminum superstructure has a glass bottom pool with a spectacular bar and lounge area underneath. She also features a helicopter landing pad, a gym and a beauty salon.

Feadship says that Aquarius is one of the brightest vessels the shipyard has ever launched because of her comprehensive LED system, the amount of light in her ceilings and the unusually large amount of glass in her superstructure.

Her propulsion package is basically a refined version of Feadship’s conventional propulsion configuration. The manufacturer also believes that sea trials will prove that the vessel will be the quietest superyacht the yard has ever built. Aquarius will achieve speeds up to 17 knots with a cruising speed of 12 knots.