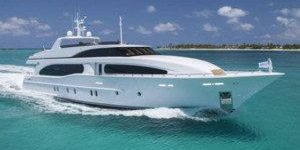 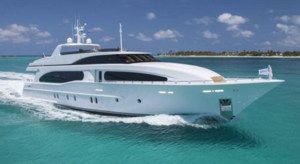 Infamous Mega Yacht Monkey Business to Appear in The Front Runner: As mega yachts go, she is at the smaller end of the spectrum, but the infamous Monkey Business played a huge role in American politics. The story she played in the downfall of Democratic presidential candidate Gary Hart is coming to live on the silver screen in the movie The Front Runner.

The film made its debut in September at the Telluride Film Festival in Colorado, the state where Hart was a senator. It opens nationwide on November 9.

Hart was the leading Democratic presidential candidate in 1977 until rumors of an affair with a woman named Donna Rice surfaced. That, along with rumors of his womanizing and a photo of the two alongside the yacht, sank his campaign. The photo showed Rice sitting on Hart’s lap while he wore a “Monkey Business Crew” t-shirt.

Media coverage of the alleged affair was widespread. William C. Broadhurst, a Louisiana lawyer, chartered Monkey Business in 1987. Broadhurst, Hart and two women, one of which was Rice, cruised from Miami to Bimini for a day trip. According to Rice, they stayed overnight because customs was closed. She and the other woman allegedly stayed on the yacht. Broadhurst and Hart reportedly stayed on Broadhurst’s boat, which was moored nearby.

Filming for The Front Runner, which stars Hugh Jackman, occurred in Savannah, GA, last autumn. It’s unclear which yacht plays the role of Monkey Business, which was originally launched by Broward Marine in 1978 and custom built for Donald Soffer, owner of the Turnberry Isle Resort near Miami.

The 25-meter mega yacht was made of aluminum and features cabins with rosewood paneling. Amenities included a hot tub and a full bar. Some of the other famous guests that sailed aboard Monkey Business included Elton John, Elizabeth Taylor, Jack Nicholson and Julio Iglesias.

In 1988, Cape Shoalwater, a U.S. Coastguard boat, seized the yacht after a safety inspect off Bimini found nine grams of marijuana aboard. In 1990, Soffer put Monkey Business up for sale, saying that the scandal had failed to make the mega yacht profitable. The vessel was priced at $1.5 million, but it failed to sell. In 2004, Monkey Business was still docked at the Turnberry Yacht Club.