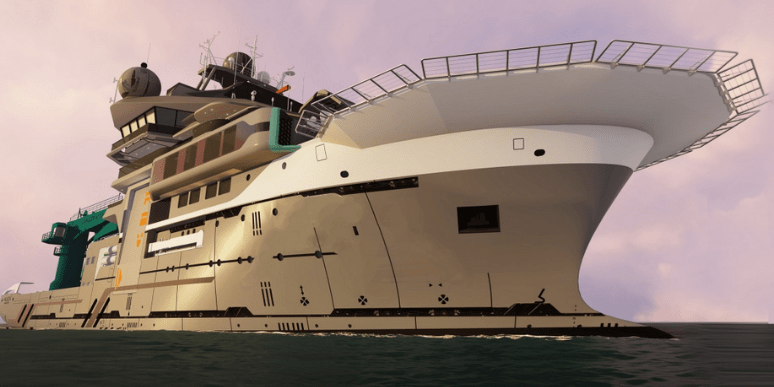 Introducing Superyachts OceanX and M/V Alucia2: Philanthropist and superyacht owner Ray Dalio, his son Mark and movie director James Cameron have teamed up with several scientific partners for the launch of the OceanX initiative. A brand new vessel, the 85-meter M/V Alucia2, will explore the oceans for educational and scientific purposes, following on the success carried out by Dalio’s existing research vessel, the 56-meter M/V Alucia. The Prince Albert II of Monaco Foundation is among the project’s philanthropic partners.

Originally built as a deep-sea diving survey vessel in 2010, Alucia2 is currently undergoing an extensive refit in the Netherlands designed by Gresham Yacht Design. She will be delivered in 2019 and according to reports will be “the most advanced science and media vessel every built.” Her features will include marine research labs, a full media center, manned and autonomous deep-sea submersibles and a range of helicopters and drones. James Cameron was consulted throughout the development of the media center. In addition to hosting scientists and media, Ocean X will conduct virtual classes and museum exhibitions for people across the world.

Ray Dalio is founder of OceanX, while his son, Mark, is the founder an creative director of OceanX Media and worked with the BBC team behind the Blue Planet II series. Dalio’s impact on the superyacht industry’s attitude to ocean conservation and scientific research is undeniable and there is hope that his commitment will inspire more owners to follow his example.

The Alucia name has become synonymous with ocean conversation and global exploration over the last decade. The vessel has been featured on the documentary series Blue Planet II.

Originally built at the Freire Shipyard in Spain in 2010, Alucia2 operated from Norway under the name Volstad Surveyor before being acquired by her current owner. In addition to the extensive marine labs, a forward helicopter landing pad and hanger will ensure Alucia2 is always accessible no matter what her location. A submarine hangar on the main deck will have the ability to carry three 1,000-meter manned submersibles to get close to the unknown than ever before.