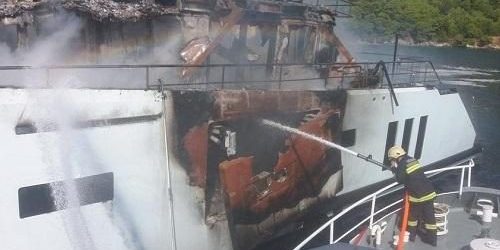 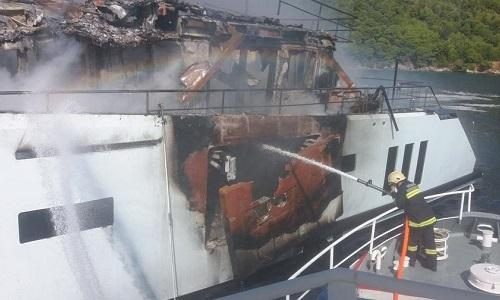 About 40 tons of diesel remained in the yacht’s tanks. Local maritime authorities ordered an eco-vessel to the scene to minimize any damage. The Croatian Ministry of the Sea, Transport and Infrastructure has indicated that the cause of the accident will be identified through an investigation carried out by the Dubrovnik Port Authority.

The cause of the fire is still unknown. Her superstructure was badly damaged by the fire and reportedly her interior is also badly affected.

Italian yard CCN launched mega yacht Kanga in May 2018. Sold in 2015 to an experienced American owner, the build commenced in January 2016. Built to RINA standards, the tri-deck displacement yacht was designed by Floating Life and Studio Sculli and featured naval architecture by Vannini-Loeggine Naval Design. With a beam of nine meters, she was built to accommodate 12 guests in five staterooms, including an owner’s cabin, to double rooms and two twin rooms with Pullman bests. Crew quarters accommodated a staff of up to 11 people.

Kanga was scheduled to attend the Cannes Yacht Show and the Monaco Yacht Show.