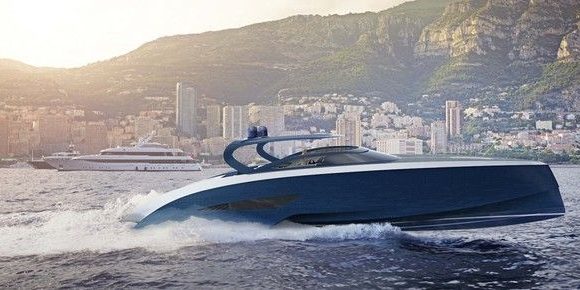 The PJ63 is the central model of the Niniette line, which also includes the PJ42 and the PJ88, the only superyacht in the collection. Each has a production time of approximately 12 months and bears an LOA that is equal to the numeral in the name. The Niniette line brings together elements from Bugatti’s class cars and Palmer Johnson’s revolutionary trimaran hull found in the shipbuilder’s SuperSport Series. Elements such as exposed carbon fiber, classic dual-tone color scheme and maple or naturally blue morta oak wood inserts are elements familiar to Bugatti owners. The lighter tone I titanium while the dark blue is carbon fiber.

The Palmer Johnson hull, first used about Khalilah, features sponsons and a monohull, which Palmer Johnson says reduces motion at anchor and improves stability while underway. Palmer Johnson expects each of the Niniette yachts to see a top speed of 38 knots.
Each Niniette model incorporates lines found on classic Bugatti cars, applying looks from the Bugatti Type 57C Atalante and the Type 41 Royale Purist. On deck wood options include bubinga and maple in addition to morta oak.

The mid-size PJ63 features a 63-square-meter salon on deck, a 43=square meter salon below deck and accommodation for up to four guests in addition to a dedicated crew cabin. Bugatti will customize the interior of each yacht according to client wishes. The PJ63 has a base price of €3,250,000.

Details on the general arrangement for the PJ88 haven’t bee released. If based on the PJ63, however, one can expect that she will have accommodation for eights guests and one crew cabin, along with 678 square feet of usable space on deck. Pricing starts at €3,250,000. Bugatti will work with owners who want more tailored touches to their vessel.