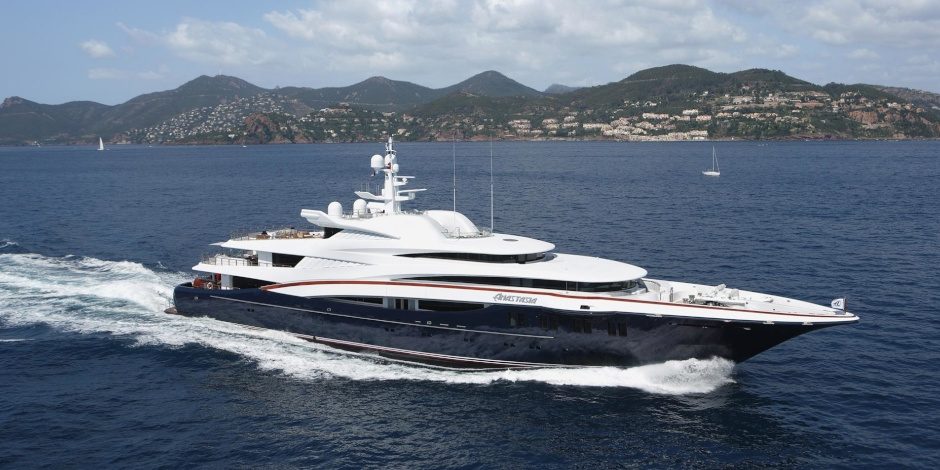 Russian Superyacht Selloff?: The Russian owner of three Oceanco superyachts has sold M/Y Anastasia, while a second vessel, M/Y Barbara, is currently on the market. Is this a sign to come that yachts owned by Russians may become increasingly available?

Anastasia, the smallest of the three superyachts, at 75.5 meters, had a reported asking price of €75 million. Designed by Australian Sam Sorgiovanni and delivered by Oceanco in 2008, Anastasia has a sleek profile that houses seven decks of accommodations that include a duplex master suite, a cinema and a main saloon that doubles as a nightclub. In addition to the master suite, she has two VIP staterooms and three double cabins, all with full en suite facilities to accommodate a total of 12 guests and quarters for 26 crewmembers.

An enormous garage encompasses half of the lower deck, housing large custom tenders, an array of jet skis, wind surfers and dive equipment. Hullside doors fold down to assist in launching water toys and to create huge balconies. She also has a Jacuzzi and enclosed gym on a split-level sundeck, and a touch-and-go heli deck. Twin 3,650hp MTU engines give her a range of 4,400 nautical miles at 14 knots.

The 88.5-meter Barbara, delivered by Oceanco just last year, has an eye-popping price tag of €189.5 million. Nirvana, built in 2012 coming in at 88.5 meters is the third Oceanco build owned by the same Russian billionaire. All three have distinctive navy hulls and exterior lines designed by Sorgiovanni Designs.

Each has appeared on the market early in their life-cycles at tremendous prices. Anastasia, built in 2008, appeared on the market in 2012 with an asking price of €125 million. Nirvana joined her that year with an asking price of €230 million. The owner withdrew the sales, but Anastasia returned to the market in 2017 and was exhibited at the Monaco Yacht Show. Her price dropped to €67.5 million, her last known asking price in February before exhibiting at the Superyacht Show in Barcelona. Industry experts note that the original prices of the yachts do not represent fair market value and that the owner originally listed in hope, rather than in expectation.

Last April, the United States imposed sanctions on Russian businessmen, companies and government officials, in a direct jab at associates of Russian President Vladimir Putin. The move was designed to punish for a variety of infractions, including alleged meddling in the 2016 U.S. elections. The move freezes the American assets of Russian oligarch as well as punishes non-American individuals and companies doing business with the sanctioned entities and individuals. Prior to the sanctions, the question was raised of whether some oligarchs would soon part with their yachts. If Barbara sells soon, could this signal a trend?