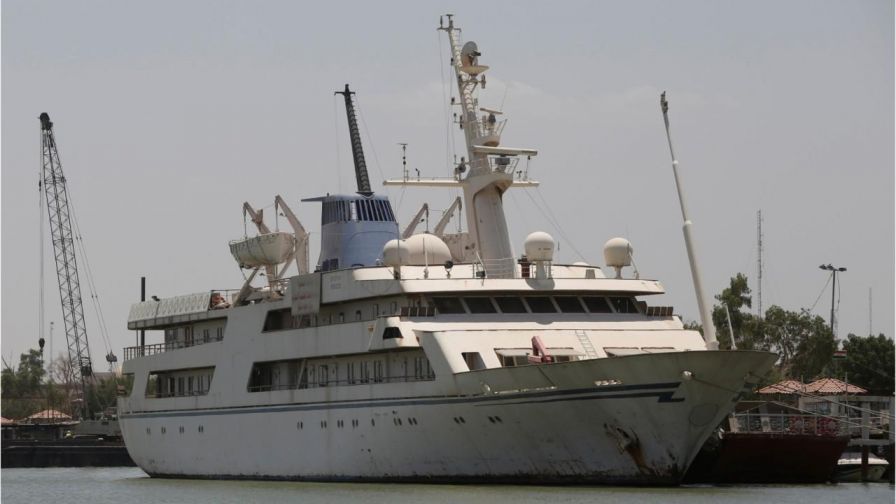 Saddam Hussein’s 30M Superyacht Becomes a Captain’s Hotel?: He never used the king-size bed surrounded by silk curtains in the master suite or the gold-rimmed bathroom, yet the 82-meter superyacht called Basrah Breeze built for Saddam Hussein not only has survived the decline and fall of the deceased Iraqi dictator, it has taken on a new life.

Built in 1981 by a Danish shipyard, the superyacht will now become a hotel for ship captains guiding freighters in and out of the port of Basra, Iraq’s main southern city. Basrah Breeze has spent most years since her launching outside of Iraqi waters. Hussein first gave the superyacht to Saudi Arabia during the Iran-Iraq War for safekeeping as the Iranians heavily bombed Basra’s harbor.

Saudi Arabia fell out with Saddam after Iraq invaded Kuwait in 1990 and subsequently handed the vessel over to Jordan. Its whereabouts were unknown for years until Iraq traced it to Nice, France, where a court seized it and sent it home in 2010. Since then, it has moored primarily in Basra.

Saddam Hussein’s government was toppled in 2003 by the U.S.-led invasion of Iraq and then hanged three years later for crimes against humanity. Like many of the other treasures accumulated by the dictator, succeeding Iraqi governments had struggled to find a use for the ship.

Basrah Breeze is equipped with a presidential suite that encompasses private quarters, dining rooms and bedrooms, along with 17 smaller guest room, 18 cabins for crew and a clinic. The opulently decorated and equipped vessel was put on the market and listed for $30 million.

The government failed to find a buyer, so for the past two years the superyacht has served Basra University by hosting researchers on trips to study marine life. Iraqi authorities have now decided to moor it permanently in Basra as a home and creation facility for ships’ captains, many of whom live in distant cities.

According to the superyacht’s captain, Abdul-Zahra Abdul-Mahdi Saleh, the yacht is in excellent condition with its two engines and generators functioning. Only periodic maintenance is required.

Although superyacht Basrah Breeze survived turmoil and three decades outside of Iraqi, her sister ship Al-Mansur, which Hussein also never boarded, suffered a different fate, sinking in the Shatt al-Arab waterway after it was hit by American planes and stripped bare following the overthrow of Hussein.