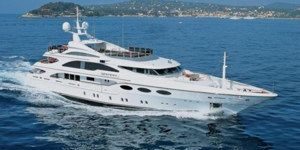 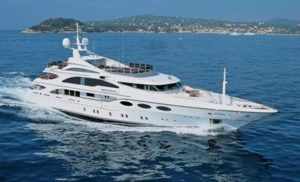 Meanwhile, Swiss company Solar Impact has revealed the details of its first ocean-going solar powered yacht ahead of the concept’s official unveiling at Cannes. The 23.9-meter aluminum yacht follows five years of research with Solar Impact noting that its seaworthy solar yacht will incorporate modern aesthetics. The company will have a virtual 3D model of its solar yacht at Cannes.

Silent Yachts’ 24-meter catamaran, currently under build at Consorzio Navale in Marotta, Italy, is scheduled for delivery in March 2020. Extensive flybridge paneling captures the sun’s rays to produce solar power. With a 10.95-meter beam, the catamaran has two electric 80kW engines with a battery capacity of 200kWh. She will be entirely solar powered with an unlimited cruising range with noise- and fume-free navigation. The solar panels have a 25-year warranty while the batteries have a 10-year warranty.

This model has several layout versions and can accommodate as many as 10 guests across five cabins. She will also feature an en suite owner’s cabin in the front with a walk-in office with a desk, storage locker and large mirror.

The company has also started construction on four additional models, including a 21-meter 70 “E-Power” catamaran.

Solar Impact’s new design will confront high levels and rough seas through use of solar technology power. The design will use SWATH (Small Waterplane Area Twin Hull) technology to reduce rolling and heeling by up to 90%. Her two torpedo-shaped buoyancy hulls that sit under the water surface and support the ship, will enable the yacht to glide almost silently without swaying, even over waves several meters high.

Solar Impact’s yacht will have a 9.9-meter beam and a solar surface encompassing 300sqm. A diesel aggregate ensures she will operate even in long periods of cloud cover.

Accommodations for 10 include four double cabins and a master suite along with crew quarters.