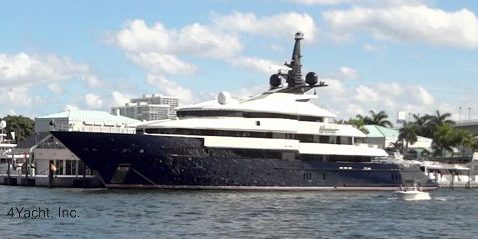 The world’s oceans may be big enough for Steven Spielberg to explore, but apparently his own Seven Seas is not. Dutch shipbuilder Oceanco constructed the 282-foot superyacht to Spielberg’s specifications in 2010.

A friend of the Academy Award-winning director reportedly told Britain’s Daily Mail that Spielberg didn’t realize how much he would enjoy his superyacht when he had it built and would like to spend more time exploring the world and taking several friends along, explaining the need for a larger vessel. Speilberg’s new yacht will be 300 feet and cost about $250 to build. Seven Seas originally cost about $185 million.

Spielberg currently charters the yacht for $1.2 million per month. Seven Seas was built in collaboration with Nuvolari & Lenard, Azure Naval Architects and the Wright Maritime Group. Her amenities include an infinity pool with a 15-foot glass wall that may also be used as a movie screen, luxurious cabins accommodating 12 guests and crew quarters for 26 staff members.

Seven Seas also has a private owner’s deck with a large master stateroom with a study and private deck area with a Jacuzzi. Other highlights include a helipad, fully equipped gymnasium, spa and massage room and an indoor cinema. Seven Seas travels smoothly at 20 knots thanks to its stability systems.