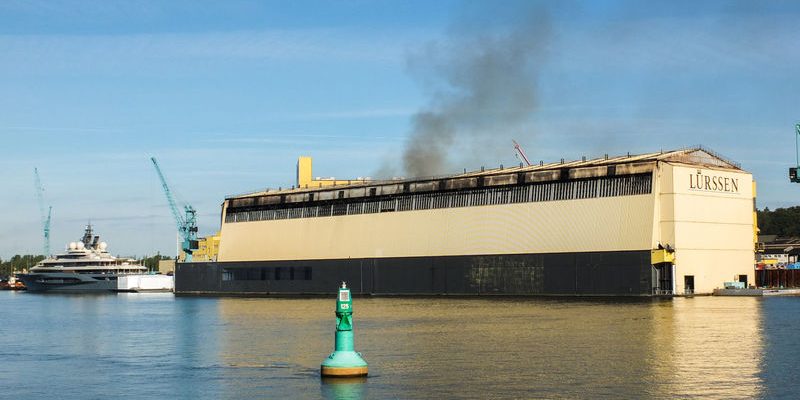 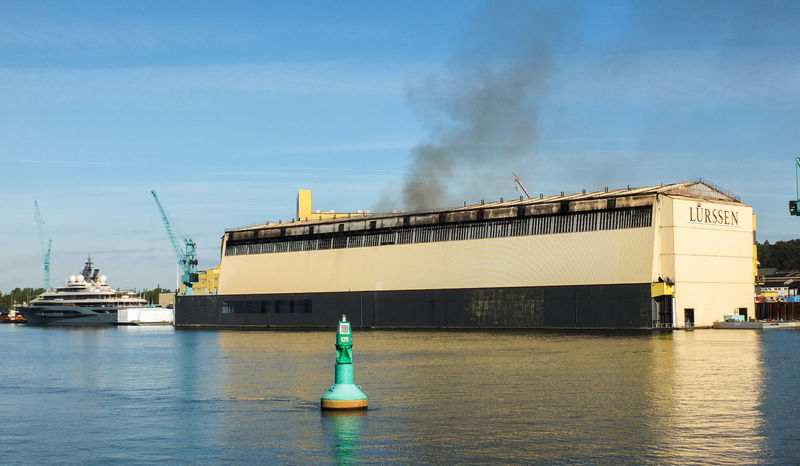 Superyacht Builder Lürssen Floating Dock and New Build Damaged by Fire: A large fire broke out on a floating dock and building unit at the Lürssen Bremen shipyard early last Friday morning. More than 110 firefighters and 35 to 40 firefighting vehicles were initially dispatched to the site where a 100-meter-plus yacht was under construction.

No one was injured in the blaze, which broke out around 2 a.m. Initial reports indicate the three of the superyacht’s deck caught fire and were extensively damaged.

Firefighters battled through the day and night on Friday. Reinforcement arrived from nearby Papenburg, as well as about 20 ship firefighting specialists from Hamburg. Special equipment was used to gain access to the yacht inside through the outer construction of the shed to reach the hidden source of the fire. The intense heat inside the building made it difficult for crews to advance deeper into the floating dock. Local authorities indicate that nearly 500 firefighting personnel ended up contribution to the operation.

According to Lürssen officials, the fire was not brought under control until Saturday morning when about 180 firefighters were still on the scene. Firefighting personnel were slowly released throughout the day on Saturday. The dock itself has also been stabilized, eliminating the possibility of the structure capsizing.

No caused for the fire has been determined. The affected dock is 130 meters long and 30 meters wide, as reported by German media. It is also still unclear which new build sustained damage in the fire. As the 135-meter Project Shu was seen on images outside the shed, it is not the new build in question. The larger Project SASSI could possibly be the vessel that burned.

The Lürssen dock fire is the second major fire to affect the yachting industry this month. The CCN build M/Y Kanga sustained heavy damage about a week earlier off the coast of Croatia.