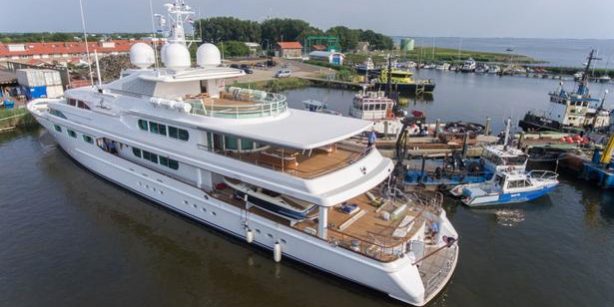 Superyacht Dancing Hare Completes Extensive Refit: Following an extensive eight-month refit at the Balk Shipyard in the Netherlands, the class superyacht Dancing Hare has been re-launched with festivities that included a baptism from a priest and christening by her captain. The 57.7-meter Amels vessel built in 1986 is now back in the hands of her owner.

Balk called the extensive refit “challenging” and indicated that preparations began before her arrival at the yard. The interior, initially designed by the late Jon Bannenberg, has been completely refurbished by London designer Olivia Outred at the request of her owner.
Work began on a technical level where equipment was overhauled and service to meet current standards. On the exterior, the sundeck was lengthened by four meters and finished the glass railings that wrap the deck. A new rigid awning has been installed on the bridge deck to extend usage. The main deck has also been completely reorganized with one big spatial area.

Diana Yacht Design is responsible for Dancing Hare’s original naval architecture. Her last major refit occurred in 1993. Accommodation on board is for up to 12 guests split across six en-suite cabins that include a master suite and a twin cabin on the main deck. Four double cabins below decks complete the accommodation, while crew quarters allow for a staff of up to 15.

Superyacht Dancing Hare has gone by many names over the years, including Lady Aida, Lady Ghislaine and most recently, Lady Mona K. She has a 9.2-meter beam and a maximum draught of 3.3 meters. Her current owner, who bought her in September 2017, didn’t hesitate to get the superyacht refitted. Dancing Hare was hauled to the Netherlands following a six-day cruise in the South of France.

A pair of 1,410hp Caterpillar 3516 DITA diesel engines gives her a top speed of 15.5 knots and a cruising speed of 14 knots. When scaled back to 12 knots, Dancing Hare has a transatlantic range of 3,800 nautical miles on a total fuel capacity of 97,200 liters.